Identifying & managing varied anatomy of palatal canal in a maxillary molar- a case report with two year follow up of retreatment of tooth number 16 with trifurcation in palatal canal.

Being aware of variations in the anatomy and configurations of root canal system is important in order to treat a tooth effectively endodontically. In 1967, the notion of a hermetic seal was introduced by Grossman. (1) When a canal or a split is missed, it may lead to unsuccessful treatment.

The palatal root canal system of a maxillary molar could also have a separate root, canal/canals or a bifurcation or trifurcation, which when left untreated, could hamper a good prognosis of the root canal treatment.

Missed canals and short obturations are some situations, which could lead to an endodontic failure. The incidence of occurrence and detection of more than one mesiobuccal canal depends on the technique used for detection, use of tools like magnification and also its presence in people from different parts of the world.

Some of the important parameters like: proper diagnosis, use of magnification, proper access cavity preparation in order to not miss an anatomy, sound knowledge of the root canal system of various teeth, cleaning and shaping till proper working length followed by good obturation are helpful in performing a good endodontic treatment. Reading a radiograph well, provides with a lot of details which could be utilized while performing a root canal treatment procedure. Also, advanced radiography techniques like CBCT could be employed in case interpretation of such details in not clear on radiographs.

In this article a non-surgical retreatment of maxillary first molar with a missed MB2, missed trifurcation and short obturation of other canals has been described.

A 26-year-old male patient reported to our hospital with severe pain and tenderness in tooth number 16 with a history of RCT two years back.

The tooth was tender on percussion and had a porcelain fused to metal crown prosthesis cemented on it.

1.Short obturation in palatal, disto buccal and mesio buccal canals.
2.The root form of palatal and offcentered radio-opaque obturation material in palatal indicated of a potential split in palatal canal.
3.Chances of a missed MB2.
The crown was cut and removed and then re-rct was initiated for this tooth.

Old obturation material was removed from the canal using a combination of manual and rotary files.

Followed by this, coronal flaring was done with one flare file (micro-mega) for MB2.

Glidepath was achieved with one G files (from Micro-mega).

Shaping of all the canals was done with 2 shape file (Micro-mega).

Canals were obturated with warm vertical compaction technique using EQ-V (Meta biomed). Sealer used was Ah plus (Dentsply Maillefer). A trifurcation was revealed upon downpacking in the palatal canal.

Obturated apical third of palatal canal could be visualised well under a dental operating microscope and the palatal split could be appreciated under 25X magnification.

The canal orifices of both the mesiobuccal canals, distobuccal and palatal can be appreciated in the post obturation clinical image captured under magnification, using a dental operating microscope.

The trifurcation in the apical third of palatal canal as well as two mesio-buccal canals with independent portals of exits could be appreciated. Radiographically on the immediate post-op and post restorative radiographs.

A full coverage zirconium crown was placed during the prosthetic phase for this tooth.

Patient reported for a follow up after 2 years. The tooth was asymptomatic and functional clinically.

A sound knowledge of root canal anatomy is important for success of endodontic treatment. Also, having a fair idea about the variations in that anatomy proves to be helpful in successfully treating a tooth. During preoperative clinical examination, paying attention to the size and form of the the tooth, could sometimes provide indication of an aberrant anatomy. During radiographic examination, a clinician should study the root form and shape and also the number of roots evident on the radiograph for gaining proper knowledge about the tooth to be treated.

Using magnification, good source of illumination for observation of anatomical land marks in the pulp chamber and walking the DG-16 probe to find a catch, may be helpful in locating additional canals.

In this case of retreatment, the presence of split in palatal canal was suspected due to the shape of the root in the apical area and also due to the off centric presence of radio-opaque obturation material seen in pre-operative radiograph.

Also, determining the correct working length of each canal is a very important step in a root canal treatment. Thorough cleaning, shaping and then a three dimensional obturation of canals till the exact working length, plays a vital role in a good prognosis of a tooth being endodontically treated. 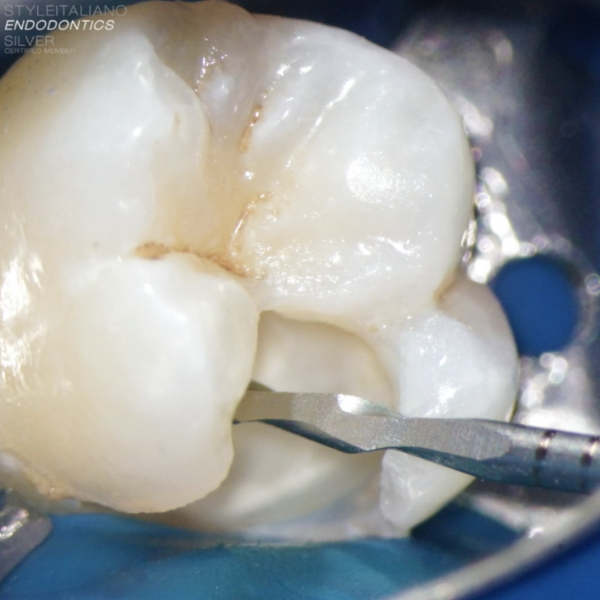 Conservative treatment of an upper molar

Deep bifurcation in the palatal canal of an upper molar