When I started treating the tooth number 3.7, I understood from the beginning that the case was peculiar. During the emergency session a radix paramolaris was not detected and a SX rotary file created immediately an accidental stripping during orifice opening.

The management of an unconventional anatomy and the repair of a iatrogenic error will be described in this article.

Mandibular molars can have an additional root located lingually (the radix entomolaris) or buccally (the radix paramolaris). The size of the RP can be, like in this case, as a shorter root with a canal shorter than the root itself.

Unfortunately, the detection of this anatomy has not been done pre-operatively and during the first emergency appointment, thus the root has been shaped with an SX causing a stripping. In order to identify the problem, the apex locator was really useful, because the working length of RP was 13mm, shorter than the 21 mm of ML. Moreover, positioning the k file with a lingual orientation, the apex locator immediately reported OVER, the typical sign of a perforation.

For this reason a CBCT has been immediately performed, allowing to detect the RP and the stripping.

In the next visit the treatment plan was:

Buccal aspect of the crown, typical sign of different anatomy

Buccal aspect of the crown, typical sign of different anatomy

RP navigation: it can be observed that anatomical root is longer than the canal.

Stripping detected and confirmed by a Paper point

The apical plug has been performed using:

The root has been filled completely with PD MTA White. A temporary filling with a cotton pellet moistened with water.

Build up, waiting for an onlay

This clinical case demonstrated us how unpredictable anatomy can be and how important is a conservative mechanical glide path. If we have any doubt about anatomy, it is better to stop the clinical session and perform a CBCT in order to avoid iatrogenic errors. The other aspect that must be considered is that the MTA apical plug is an easy clinical procedure and it should be applied more in our daily practice . 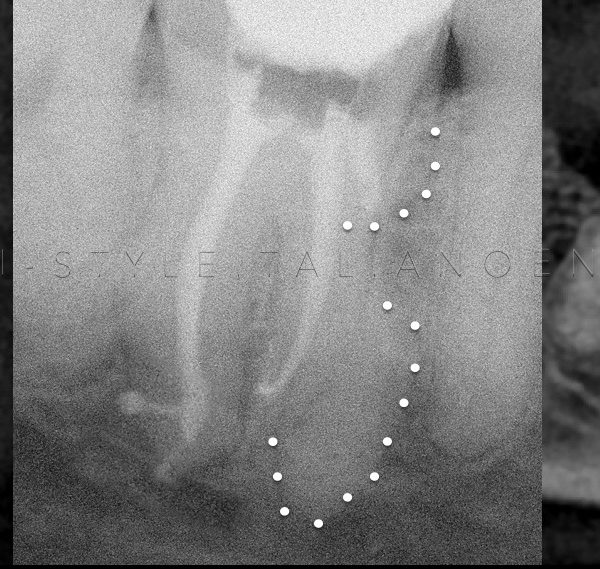