The WAND STA in the treatment of mandibular teeth: a multicentric study

Patient’s anxiety is a relevant problem in dental practice, above all when it is related to the fear of pain. Several patients consider anesthesia as the most traumatic experience in dental procedures, mainly referring to previous dental treatments. In order to provide an efficient analgesic effect reducing the fear and the pain related to the injection, a computerized system to provide anesthesia (The Wand) has been introduced in the marked: this allows practicing every kind of nerve block and permits to anesthetize a single tooth by using intra-ligamental infiltration.

This kind of anesthesia is indicated both in endo-restorative and surgical treatments and the Literature reports that patients like it because the lack of numbness of the lips/tongue/cheeks after the procedure. The main post-operative complications reported with using this technique are necrosis or inflammation of the gum in the injection site and pain while chewing.

Pain during injection is practically absent.

The Literature reports a good outcome of this technique, since the use of the Wand system determined significantly lower pain ratings and lower increase of heart rate than the traditional syringe. During injection, the number of patients showing a relaxed behavior was higher with the Wand than with the traditional local anesthesia (Sharath Asokan, PR; Geetha Priya, PR; Baby John, J; Praburajan, V; Punithavathy,R; Yogesh Kumar, TD 2015, Garret-Bernardin, A; Cantile, T; D'Antò, V; Galanakis, A; Fauxpoint, G; Ferrazzano, GF; De Rosa, S; Vallogini, G; Romeo, U; Galeotti, A 2017).

The Literature reports that, when placing a buccal infiltration on upper teeth, the onset of local anesthesia and the pain experience was no different using the Wand and the conventional technique (Kandiah, P; Tahmassebi, JF 2012).

As Styleitaliano, we set a study where 6 operators interviewed 180 patients before and after endodontic, restorative or surgical therapies in which anesthesia of a single tooth was provided by means of WAND. Clinicians followed the same training and employed the same anesthetic (3% mepivacaine, 1,8 mL, no adrenaline).

30 patients requiring treatment in the lower arch were selected by each member. Inclusion criteria were: age 12-75, no systemic disease, good oral hygiene.

A randomized table split the patients into 2 categories: in group 0 the anesthesia was provided only by buccal infiltration, in group 1 the infiltration was only lingual.

The patients had to fill in a form in which they were asked to evaluate, on a 0-10 scale, the pain they felt during the anesthesia, the pain during the treatment, their postoperative pain and if they preferred Wand to the conventional anesthesia.

The clinicians, on the other side, had to record the kind of therapy performed, the perceived efficacy of the anesthesia, the need of additional injections, the patient’s collaboration and the post-operative complications, if required.

At the end of the study, the results were collected and summarized as follows.

From the clinician’s point of view, the average efficacy of the STA was 8,3, while the average patient compliance was 7,9. In 41 cases out of 180 it was necessary to provide additional anesthesia in order to have full disappearance of the pain. The anesthesia had a good efficacy, regardless of the injection site (buccal or lingual) selected.

In conclusion, the WAND STA was found to be effective in pain management in endo-restorative and surgical procedures of mandibular teeth, as reported by several studies published in the Literature. The finding of this study adds the detail that the machine is effective, regardless of the injection site (buccal or lingual) selected.
The difference between the anesthesia efficacy achieved by the clinicians involved in the study was practically absent.
The majority of patients was satisfied with the treatment received and declared to prefer the computerized anestesia to the conventional technique: this in concordance with the studies of Re et al, which also pointed out the interesting fact that the patients would pay more to receive computerized anesthesia. (Re, D; Del Fabbro, M; Karanxha, L; Augusti, G; Augusti, D; Fessi, S; Taschieri, S 2017) 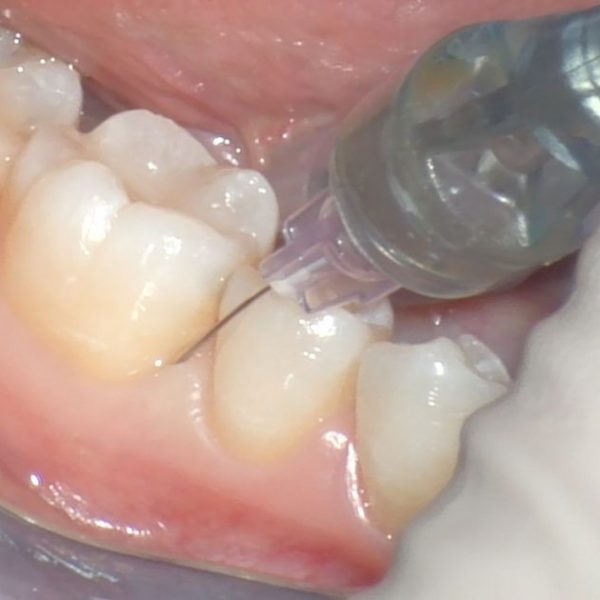