Management of Middle Mesial Canal in a lower Molar

Knowledge of both normal and abnormal anatomy of the root canal system dictates the parameters for execution of root canal therapy and can directly affect the outcome of the endodontic therapy. Missed extra roots and root canals are a major reason for failure of root canal treatment.

Till date few clinical reports have described more than two canals in the mesial root of mandibular molars. Among these, the occurrence of middle mesial canal in the lower mandibular molar is (1–15%); this canal is also called “intermediary mesial canal” or “medial mesial canal” since it is situated centrally between the main buccal and lingual root canals. The diameter of these middle mesial canals is smaller than other two and is age related due to dentinal apposition. The mesial canal is called independent when a distinct coronal orifice and apical foramen were observed or confluent when converging to one of the other two main canals and terminating at a common foramen.

Excessive gingival tissue removed by thermacut bur. The bur will cauterise the gingiva when cutting on high speed without the water spray

Gingival polyp was removed as a one piece

This figure shows complete removal of gingival polyp, and tooth ready for isolation

Isolation with rubber dam for pre-endo buildup, clean margin all around the tooth

All carious tissue was removed and Access opening was made through the pulp chamber, a proper access cavity preparation is of central importance in localizing the orifices of the root canals

Removal of necrotic pulp tissue from the canals

Starting the build up, using Circumferential matrix in order to restore the missing walls

Pre Endo-buildup was done, and the tooth is ready for the next visit

Shaping of the canals

Cleaning of the isthmus by ultrasonic tips

In most of the cases, middle mesial canal is hidden by a dentinal projection in the mesial aspect of pulp chamber walls, and this dentinal growth is usually located between the two main canals (mesiobuccal-mesiolingual)

The additional canal was explored with a no. 10 K-file

No.10 K-file was separated during the negotiation of MM

Separated instrument jumped from MM to Distal canal during removal

Note: I should have closed each canal orifices by teflon or liquid dam in order to prevent this mistake

Apical gauging is a technique to best determine the size of the apical constriction and the taper of the apical portion closest to the foramen.

2.Achieving true tug back – as opposed to false tug back!

How do you do apical gauging?

Establish the depth of apical constriction – this is the zero reading on your apex locator. Remember your working length will be 0.5mm – 1mm short of this.

After cleaning and preparing the canal system to your working length, passively insert 02 taper hand files, starting from #15. If the file goes past the apical constriction (your working length + 0.5-1mm), then choose the next largest file and repeat.

Apical foramen size for the canals was

Cone fit it should be checked with wet canal not dry, so it work as lubricant in side the canal as the sealer work

With different time for irrigation

Activation of irrigant solution by ultrasonic

Clean and Ready for obturation

Down pack by x-ray

2020: Best case of the year at StyleItaliano Endodontics Facebook group

Mandibular molars demonstrate considerable variations with respect to number of roots and root canals. The possibility of additional root canals should be considered even in teeth with a low frequency of abnormal root canal anatomy.

treating additional canals may be challenging, but the inability to find and properly treat the root canals may cause failures. Information on root canal anatomy come from radiographs is valuable and should always be integrated with a careful clinical examination, preferably under magnification for the better and successful endodontic treatment. 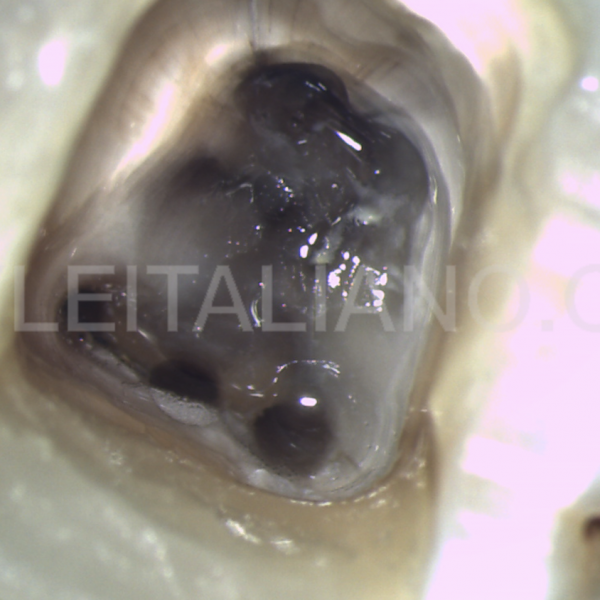